Dorokhov was born in Moscow on March 6, 1906 and died in 1960. At the beginning of his art career he studied at the Moscow High Art Technical Institute. Following in line with the Regime, many of his paintings focused on the laborers of the nation. His art reflected his idea that the nation was under construction. 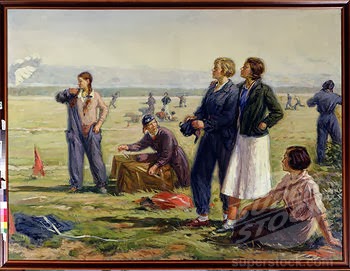 In 1930's, his art became mostly portraits. His message reflected his thoughts that the destiny of the individual was connected with that of the nation. Dorokhov liked to depict a youth with strong hopes and aspirations to carry and hold the nation in the future. During the 1940's he focused on thematic painting, but was criticized by the Academy of Arts for not painting in the approved classical style.

Dorokhov liked to travel and thus painted many landscapes showing various parts of the Soviet Union. They showed cities, farm fields, and industrial towns. He was also an active painter during the Great Patriotic War. He sketched the men fighting valiantly on the front line, showing the strength and courage of the men.
Posted by abull No comments:

Anatoli Levitin was born in  Moscow in 1921. Throughout his childhood he gained artistic skills and knowledge through his education. He attended the Central House of Artistic Education of Children in Moscow. Levitin later attended the Academy of the Arts in then Leningrad (now St. Petersburg). During World War II, Levitin was drafted and was fighting from 1942-1945. When the war ended, he returned to Leningrad and enrolled in the Department of Paintings at the Repin Institute.

Levitin is known for his realist paintings. He worked to depict common people, young and old. He also painted about the Revolution of 1917 and the Great Patriotic War. Levitin did not tend to paint plain landscapes. Typically he added people and emotion into the painting, using the landscape to add to the overall theme of the painting. Levitin was very skilled at using humans to convey different messages. It was common that he would take experiences from his life and transform them into painted messages as well.

The painting at the left is a good example of Levitin's artwork. The emotion and theme all stems from the people. The facial expressions exhibit happiness and clearly glorify the moment. The background adds to the painting yet, is not a main focus.
Posted by abull No comments: